You might remember my recent post on Lush's Ultrabland cleanser that I had been trying for a few weeks. Well it's been a few more weeks and I think I can pass my verdict now. 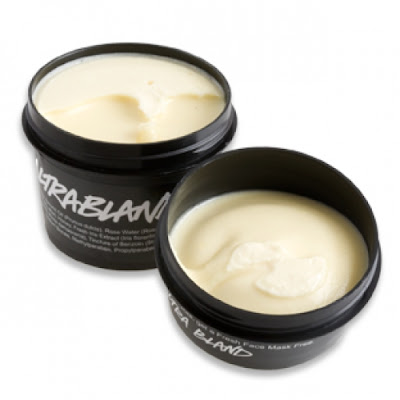 This stuff is insane.

Seriously, everyone should try it. It's so amazing, and when I say everyone, I really mean everyone. I truly believe that this is a cleanser for everyone. People that aren't up for not using a conventional cleanser may be excluded, but all skin types should definitely give this a try.

It has continued to clear any spots I had and reduce redness. Even with continued use I still relish the feel of my moisturiser as I apply it, it's so lovely. It hasn't made my face oily (though I do have dry skin), and you clean it all off and tone, so it shouldn't be a problem for anyone.

And over production of sebum in the skin can be caused by cleanser stripping the face of all the oils and the skin not getting enough moisture, so the skin produces more sebum to compensate, it's just not very good at gauging how much is too much. So adding more sebum-like oils (ie. jojoba and peanut oils) will cause the sebum production to even out. I have actually found that my skin is a lot less dry, it feels smoother and more moisturised, but I don't have to worry about having a shiny face.

Sorry, it annoys me when people feel the need to strip all of the oils from their faces and then add little in return on top, and this cleanser is really awesome!

So I think I've been using this cleanser for a few months now (not sure, but I can hardly remember using my old cleanser anymore) and I don't think I could ever use something different. It really is the best I've tried.

So for people a bit dubious of a cleanser that is oil based and a large majority of the product being oil as well, try it. Seriously. Though you do kind of have to use a toner (defs use Lush ones, alcohol free) and make sure you get it all off, but it is so worth it.

Do be prepared for some possible break outs the first week or two that you start using it, as it is a very deeply, but gently, cleansing cleanser, it brings all of the gross stuff in your face to the surface and takes a little bit to completely get it all out. So keep using it (though if you get really bad breakouts, you might want to stop and make sure you're using it correctly) and enjoy the results.

Also, I do a few face masks/scrubs each week, which also gets rid of any build up if there was any. I am currently enjoying Lush Ocean Salt, Perfect Potion Bare Faced exfoliator and Arthur Lawrence Cleanser III


In other news, I've been completely obsessed with Anya Marina's cover of Whatever You Like by T.I.
I can't stop listening to it, I love it so much. So I would definitely recommend anyone and everyone listening to it, it's very different to T.I.'s version, incase you don't like that one. And while I'm on the topic of covers that sounds awesome, but very different to the original, for Lordy take, you must listen to Kate Miller-Heidke's cover of The Real Slim Shady by Eminem, my Lord, it's amazing. Go hence and listen! (Can be found here on youtube)

Stuff I wrote about a while ago